7 Benefits of Standing Desks, And How To Buy Them At Affordable Prices

Research suggests that using a standing desk can encourage workers to spend less time sitting. People who sit with poor posture put themselves at risk for a raft of health problems, including misalignment of the spine and knees, which can increase stress on the knees; exacerbation of arthritis; poor circulation; fatigue; jaw pain; headaches; sexual function issues and shoulder and back pain. 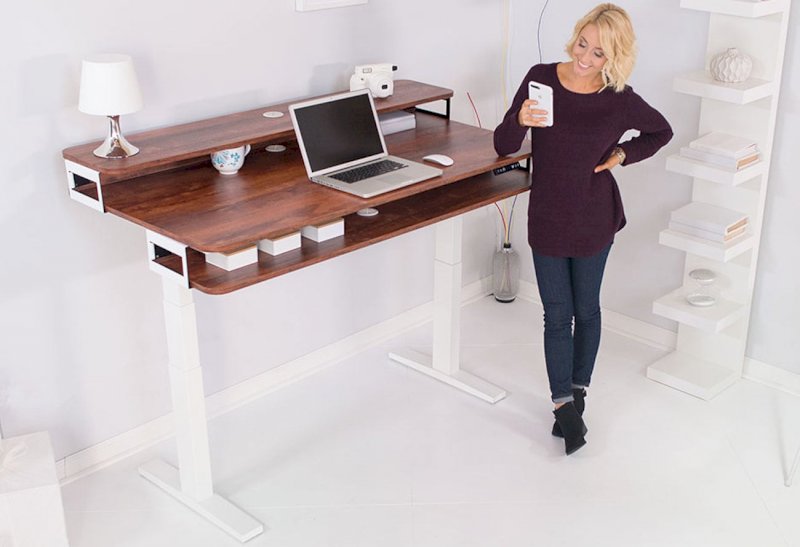 Does it really provide health benefits or is it just a passing fancy?

Standing keeps your bold level at a healthy level and hence helps in an active circulation and keeps the brain more alert and active.

When sitting more for a prolonged period of time, the brain gets bored and hence you tend to feel sleepy.

While standing, it’s hard for a person to get sleepy because the brain is constantly reminding the body to get the job done. Hence, the person tries to be more productive in his work.

This means that, our body burns up more calories by standing than sitting in the same position for the same period of time.

When we sit for a long period of time, our body slowly goes into an inactive state where it stops producing the necessary chemicals and enzymes required for digesting food and its associated components such as sugars and fats.

3. Better posture and no more back pain:

One of the benefits of standing desks is that they are good for correcting the posture of the employees. Sitting too much for a long period of time can be hard and can stress your muscles of our bum or our lower back muscles with too much pressure.

With the course of time, this stress can lead to aches and can form other complications such as nagging back aches, shoulder pains and stiff necks.

As a matter of fact, most of the back pains caused to our generation is the bad posture of sitting and slouching infront of the computer for long hours of time.

Standing can eliminate such symptoms as it keeps the back muscles straight and it is proven that standing can reduce aches and stress injuries such as carpal tunnel syndrome and such.

Many standing desk users find it easy to communicate with their colleagues as they can move freely or they can directly contact with them by making eye contact while doing work.

Users can talk much easier since they just have to see over the cubicle, to contact a person. But, employees do complain about the lack of privacy that they receive, since what they do inside their respective cubicles can be easily seen by others.

It has been proved that people who use standing desks have less chance of being obese when compared to people who sit and do their work.

Further research about this experiment showed that the people who were standing moved and walked around, on an average 2.25 hours a day, at least 50 calories were burned in an hour, which is very high compared to the number of calories burned by people who used sitting desks.

Moreover, metabolic changes within the body was also found, since the employees became more active.

Adults who spend more than 2 hours sitting during work have a 125% increased chance of getting a cardiovascular disease either in the form of chest pains and heart attacks.

The risk is very high when compared to workers who spend most of their time moving around.

Even for people who get limited exercise, don’t get as much reduced risk of cardiac attacks as that of standing desk users.

This can be proven by a recent study that in Britain, the bus drivers tend to develop more risk of getting a heart attack than the conductors. This shows how much standing is beneficial for health.

This has not been proven, but recent studies show that standing can reduce people getting a chance of cancer.

But it has been found that standing can cause our body to stop producing C-reactive proteins which is believed to cause many forms of cancer if found in excess within the body.

Prevention and long-term control are key to stopping asthma attacks before they start. Treatment usually involves learning to recognize your triggers, taking steps to avoid triggers and tracking your breathing to make sure your medications are keepin…

Where Can I Find The Best Gucci Deals?

Luxury is the name of the game at Gucci, so those exquisite designer duds don’t exactly come cheap — or even go on sale very often. But don't worry, there are still some ways to score HUGE savings on this fancy brand. Check out some of these deal…

These Mortgage Home Loan Lenders Have The Best Rates